Hotel design begins with its origin, the place the hotel is destined to celebrate.

Rome is known as the eternal city – a destination to visit at least once in your lifetime. DoubleTree by Hilton Rome Monti is located in one of the most iconic and ancient neighbourhoods of the city: the Rione Monti, proudly the first district of Rome, a dynamic and eclectic artery that develops around the Via Urbana and Piazza Esquilino, on which stands the Basilica of Santa Maria Maggiore.

The hotel overlooks Piazza dell’Esquilino, a five-minute walk from Termini Station. The colosseum, Roman Forums, or the Spanish Steps are all within walking distance. Visitors will be greeted with the most ‘authentic’ daily life of Rome, thanks to small art galleries, wineries and bistros that exert a ‘vintage’ flavour.

Rione Monti is the central meeting point made of narrow medieval streets and hidden trattorias, alternative shops, and trendy bars. The retro atmosphere combined with terracotta facades and pots of plants left simply along the sidewalk are typical of the streets of Roman San Pietrini. This was the biggest inspiration for the interior design concept for the hotel by THDP studio, London. In addition to the studio owners, Nick Hickson and Manuela Mannimo, the concept and project was followed by Simone Bretti, a Roman product designer who returned to live in Rome after a few years in London, and Francesca Benedetti, who lived in Rome for nine years before moving to London.

Philological research guided the entire project to merge two existing buildings with the aim of combining Roman rhythms and lifestyle with the functionality of a hotel and establishing a continuous dialogue with the city. 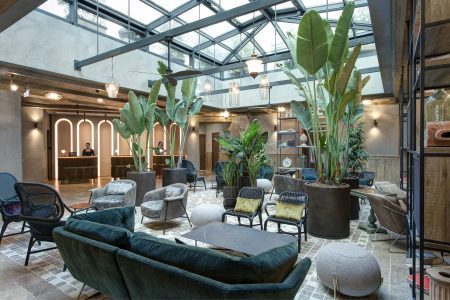 DoubleTree by Hilton Rome Monti is filled with the lushness of small oases of greenery, and is housed within two building that are connected, one of which was the Commodore hotel and the other the headquarters of Reale Imobili. The project is not a ‘renovation’, it is an ‘adaptive reuse’ curated by Gabriele Masina studio in Rome, where only the structures and facades have been preserved, but all the internal partitions have been planned in collaboration with THDP. The result? A contemporary social space that is informal, natural, and fresh.

With 133 rooms spread over seven floors with large windows, the hotel also includes ‘Mit’ bar and café that features a stunning outdoor seating area for guests to fully take in the streets of Rome. The restaurant, ‘Mamalia’ offers an open kitchen dining experience equipped with a wine tasting area. On the eighth floor of the hotel, The Mun rooftop bar boasts a panoramic terrace with direct views of the Santa Maria Maggiore abbey.

The hotel has three modular meeting rooms with natural light which can accommodate up to 60 people. The flooring is custom designed by THDP for Brintons, with shapes of mosaics from the Caracalla baths, continuing the theme of the lobby. The adjacent hub offers a relaxed and informal environment with low seats and armchairs by Saba Italia complemented with the outdoor feel of the Expormim rattan chairs and two beautiful kenzia planters in terracotta on a pedestal. 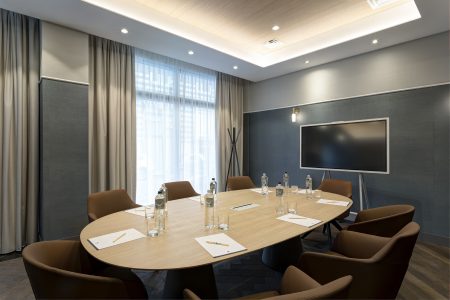 The fitness centre overlooks an internal courtyard with state-of-the-art machines, including treadmills, elliptical bikes, vertical exercise bikes and steppers – all equipped with advanced TV and cardiovascular monitors to track activity.

The lobby is the arrival point for guests, it is open and dynamic and no longer simply a place of passage, but a place of relaxation, a work station, or a place to stay and have a drink. The interiors are divided into areas defined by different carpets, lounge seats that form private areas and different natural elements. The reception refers to the arches of the Termini station. There are seven arches, like the seven hills of Rome – the tallest of which, Esquilino, is the ground of the hotel. The social space is developed around the skylight, inspired by Roman gardens. The custom designed shelving creates a sense of privacy and the entire space is styled with unique pieces creating an atmosphere inspired by the Via Urbana. In the hotel there is also a path of works of art that guests can indulge in; drawings, paintings, photography and sculptures, in a mix between old and new. 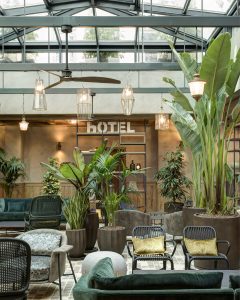 The hotel design welcomes its guest in a space, which follows the Esquilino hill, gently rolling down. This was a challenge during the planning stage as the lobby and the bar are at two different levels, which meant staircases and a lift had to be installed. The lobby has a few indoor terraces which overlook the square on one side and the lobby courtyard on the other. The space is rich in natural light connecting the outdoor with the indoor style. The flooring is in line with the outdoor tavertine pavings of the streets, while the carpeted areas are custom designed with patterns inspired by the existing mosaic flooring of the Caracalla thermal baths. The mood is residential and eclectic with furniture pieces by Saba Italia, Vibieffe, Billiani and Expormim, upholstered with soft fabrics in rich warm terracotta, dark gold and dark burgundy. With the help of landscape designer Danilo Bitetti and Verde Cassia, bronze planters in spaces that had natural light such as the sky bar, private terraces and a few rooms.

The walls are painted in warm and natural hues, many walls are left quite bare, with a textured finish using the concrete spatula effect. Natural materials such as wood and stone, coupled with earthy colours, ties together the relaxing and casual atmosphere that DoubleTree aims to provide. A minimalist approach to decoration further accentuates this. 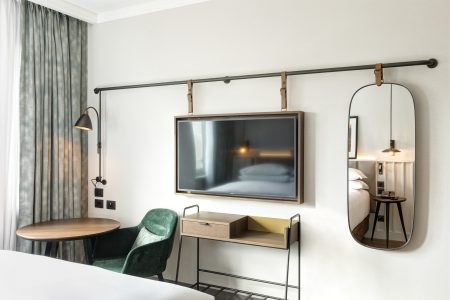 The hotel consists of 133 rooms; 38 guest rooms (7 of which are accessible rooms), 71 superior rooms, 16 deluxe rooms, 7 junior suites and 1 one-bedroom suite. All rooms feature a bright and contemporary design flooded with natural light - with some having breath-taking terraces and panoramic views of the Basilica of Santa Maria Maggiore. The rooms are in a neutral colour palette with touches of dark green, dark bronze, and wooden touches to create a warm and comforting environment. The headboards are designed with white marble columns from Rome as an inspiration. Moving on to the bathrooms, they are all fully tiled with grey tiles in a “cementine” effect – a hexagonal shape typical of Roman flooring by Marca Corona, an Italian maker who specialises in decorative tiles. The crittall shower screens are unique with some made in a green crystal by Box & Co. The green hue is the chosen accent colour to complement the many neutral tones through the rooms and the entire hotel. 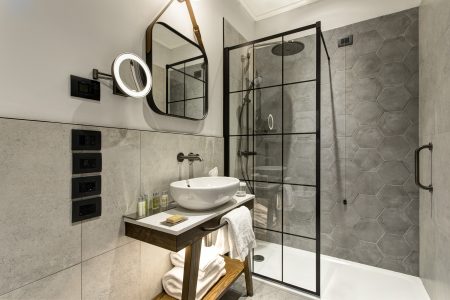 DoubleTree by Hilton Rome Monti Hotel is a unique hotel design project by THDP, with countless hours of thought given to each element of the hotel, from a small decorative piece in the lobby to larger custom-designed works, it is a space for relaxation and socialising.

SkyCity’s New Zealand International Convention Centre has been further delayed, now expecting to open in the second half of 2020. The project’s delays are…