A hotel on the outskirts of Bristol, UK has collapsed after catching fire.

Firefighters were first called to the Premier Inn Bristol Cribbs Causeway on Wednesday afternoon local time. Smoke from the blaze led to warnings from the fire service during the night about visibility problems on the nearby M5 motorway.

"All last night I've been hearing bangs and crashes - I've just had to walk to my car now and the roof's still on fire," local resident Laura Evans Hughes told the BBC.

The incident comes just days after the hotel chain - the largest in the UK - opened its 800th hotel in Skegness, Lincolnshire.

The Avon Fire & Rescue Service began posting dramatic footage to social media, showcasing the extent of the fire. During the night, a section of the hotel roof collapsed to the ground. 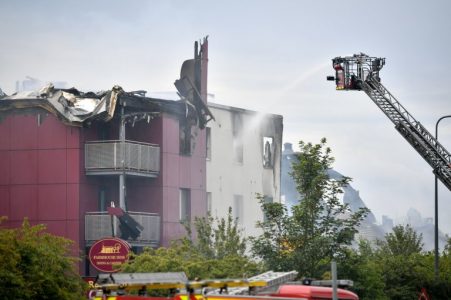 Police also shared photographs taken from a drone once the fire had been mostly subdued. Emergency services were still at the scene as the sun began to set on Thursday, over 24 hours after the first call.

Many local businesses have closed, awaiting instructions from the emergency services. The Mall shopping centre, two miles from the scene of the fire, is still open, though motorists are being diverted away from the fire.

All guests and staff have been accounted for. No statement has yet been given regarding the potential cause of the fire.