Born in Bucharest, Romania, Mario Sandulescu made his first move abroad at the age of 25 with The Ritz-Carlton Grand Cayman. After further stops in Singapore and Puerto Rico, Sandulescu eventually made it to the shores of New Zealand with InterContinental Wellington.

With a love of drawing and interest in maths and physics, Sandulescu originally dreamed of becoming an architect. “But something along the way changed and I started dreaming of traveling the world. I wasn’t sure how I was going to achieve that, but the dream was powerful.”

Powerful enough to move him towards the realm of hotels and international travel. Sandulescu described his first job, a morning server at the InterContinental Bucharest, as a “rite of passage” where breakfast shifts were challenging for a newbie, not to mention the 4:30am wake up time. However, Sandulescu loved every bit of it. “I enjoyed the camaraderie within the team and meeting people from all backgrounds and cultures.” 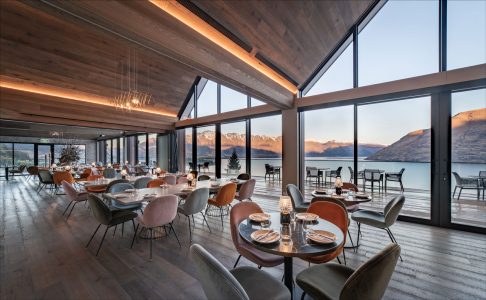 After starting at the InterContinental Bucharest at the age of 19, Sandulescu moved from Concierge and front desk before advancing to Duty Manager and finally Guest Relations and Club Lounge Manager. “It was a great environment that promoted personal growth.”

And that personal growth has been an important core element of what Sandulescu has been able to achieve at Kamana Lakehouse in Queenstown. Located high above Lake Whakatipu the elegant Kamana Lakehouse opened in late 2018 following a multi-million-dollar brand development by owners Coherent Hotel Limited. “I am immensely proud of the leadership team I have built at Kamana Lakehouse over the last two years,” admitted Sanduescu, “I am at home at Kamana with my new adopted Kiwi family, in a place we created, cherish and strive to improve every day.”

Sandulescu achieved the General Managers role at Kamana Lakehouse at a remarkable age, under 35 years old, but with his impressive resume, which has included more than ten years in high-end hotels from Europe to the Caribbean to The United States, it was easy to see why. Not only was Sandulescu able to adapt to each of his new surroundings, he thrived, immersing himself in order to understand and appreciate the people of a country and their unique culture. “I am so grateful to have lived in some of the most amazing spots around the world.”

Over the span of his career Sandulescu noted that the fundamentals of hospitality itself have not changed, but technology has. “During my front desk years we used dot matrix printers (you may need to google what those are) and an audit took four hours, now an audit takes 15 minutes.” Sandulescu is a big fan of technology and feels lucky to have implemented some great solutions that have reduced waste, improved guest communication and service, and have had a positive impact on the workload of his teams. “I advocate for constant change.”

His favourite aspect of his day-to-day work? That one is never done learning. “There is always something new, no days are the same and I love helping develop the ones around me while doing what I love.” And if the days ever do get too stressful there is always Yoga. “I’ve incorporated meditation in my daily life for the past year and it has been, without exaggeration, an eye-opening experience.”

Perhaps it is this practiced mindfulness that has helped enable Sandulescu to become the centred, and highly capable, young hotel star he is today.