Born and raised in the San Francisco area, Ian Charlton spent nine years on the Gold Coast before his recent relocation to New Zealand’s capital. Whilst he has worked in hospitality since the age of 15, it was initially a very different passion that brought him to the Southern Hemisphere.

“I swore I was going to be a professional soccer player,” Charlton told Hotel Magazine. “Growing up, I used to spend all my time playing on very competitive soccer teams. I competed in a couple of tournaments in Sydney, and through that process, over the years, my family made some good friends in Australia and we came back on a couple of occasions to holiday.”

Whilst studying for a degree in recreation administration at California State University, Chico, Charlton opted to spend a semester overseas, and was drawn to the Gold Coast by its beach culture. Whilst attending Griffith University, he met his now fiancée Bronwyn, and though he briefly returned to California to complete his degree, he soon came back to Australia to be with her.

Charlton’s father worked for United Airlines for 45 years, designing computer systems for planes. A believer in the value of hard work, he encouraged Charlton to work at a local restaurant in Half Moon Bay, where he cleared and cleaned dirty tables.

“It was just as glamorous as it sounds,” Charlton joked. “My dad is old school and there were no hand-outs in my family, so I needed the job for pocket money and to save for my first car. Though it was far from luxurious, it absolutely taught me the value of a dollar and instilled in me some very basic but fundamental work ethic traits that I try to live by today.”

Shortly after this first restaurant job, Charlton picked up a weekend position serving banquet tables at the local Oceano Hotel & Spa. A prime wedding venue, he was kept busy by the steady footfall of guests at the hotel, and soon found himself hooked on hospitality.

“Stripping it back to basics, I love the pressure that comes with working in a busy hotel,” he said. “The urgency and excitement of quick turnaround times is a daily event, but at the same time, no one day is exactly the same. Each brings with it new and unique challenges. The magic behind the curtain and how it all unfolds still gets me excited to this day.” 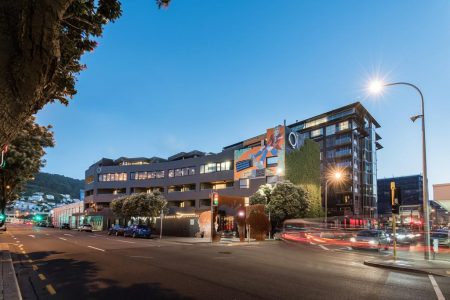 Having worked in hotels around the world, Charlton can draw upon a wealth of experience in his new role at QT Wellington – though not every experience bears repeating. During a year-long internship undertaken as part of his university studies at the Marriott Grand Residence Club, a ski resort near Lake Tahoe on the California-Nevada state line, Charlton and his manager were alerted late one night by a phone call.

“It was around 10pm and the manager on duty took a call from a guest, then abruptly hung up the phone. She jumped up, clearly startled, and ran past the desk towards the pool deck. She returned moments later and calmly sat down and returned to work – she didn’t say a word.

“Shortly after, a second call came down from a different guest room. I answered, and the guest advised me there was a large brown bear taking a casual swim in our outdoor pool. I looked over at the manager – she knew exactly what the call was about, and said casually, ‘I locked the doors. This happens all the time.’” Thankfully, bears are thin on the ground in Aotearoa, and Charlton is looking forward to new experiences in windy Wellington, a city which reminds him of the Bay Area thanks to its heady mix of art, creativity, and passionate locals, not to mention its waterfront location. A fan of craft breweries and great food, he’s already developed a long list of local spots to try out, and is particularly excited by the opportunities afforded to him at QT Wellington, having relocated from QT Gold Coast.

“Having the opportunity to take the next step in my career at the quintessential QT Wellington, a truly design-led hotel, is what most hoteliers dream about,” he said. “The eclectic art collection, award-winning restaurants, and passionate staff make QT Wellington the ultimate city hub in the capital of culture and creativity.”

Queenstown Country Lodge has announced the appointment of Jennifer Harper and Mark Samways as on-site hosts at the lodge. The duo will start work on…