As part of the nationwide teddy bear hunt to entertain children during lockdown, the Hotel Grand Windsor has placed a virtual teddy bear in some of the windows of its hotel facing Queen St. 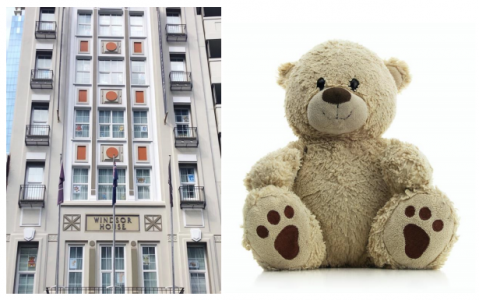 The hotel is inviting children, or their parents, to go to the page, pick the teddy that most appeals to them and give it a name. By commenting on the photo with the bear’s suggested name and liking the Facebook and Instagram pages, each person will go into a draw to win one of five overnight stays in Hotel Grand Windsor for their family.

“It’s a chance to offer a small ray of sunshine, something to look forward to for children, and is a chance for a post-lockdown treat for five families,” explains CPG Hotels Director of Sales and Marketing, Lisa Breckon.

The nationwide bears-in-windows campaign, organised by Annelee Scott, is based on Michael Rosen’s hugely popular children’s book We’re Going on a Bear Hunt. The “we’re not scared” message of the book has resonated with Kiwis.

If kids happen to pass by Premier House in Wellington, they’ll find Prime Minister Jacinda Arden has put a bear in her front window.

The teddy bear hunt has become a symbol of hope and care and a way to make children feel safe. Teddy bears are now appearing in windows the world over.

The winners of the Hotel Grand Windsor competition will be drawn on 1 May and announced on its Facebook page.