With mandatory masks and other innovative gadgets meant to combat the virus, the COVID-19 pandemic has ushered in an era of distinctive new travel experiences.

Some airlines such as United have installed touchless kiosks, enabling passengers to keep their hands clean while checking in, while airports such as Los Angeles International, have installed thermal imaging cameras to scan for fever symptoms.

One of the latest iterations of virus-fighting tech at the airport is a germ-zapping robot called LightStrike at San Antonio International Airport in Texas. According to Xenex, the company behind the device, other airports are considering whether to invest in the device that has been shown to be effective against the coronavirus.

"When you bring something like SARS-CoV-2 into focus, institutions like hotels, airlines, professional sports teams, they're looking for what's best-in-class to kill it," said Morris Miller, CEO of Xenex.

The company said its robot business has increased 600 per cent amid the pandemic. Most of the increase is related to the health-care industry, but the robot also has entered new markets such as hotels, professional sports facilities, and police stations. 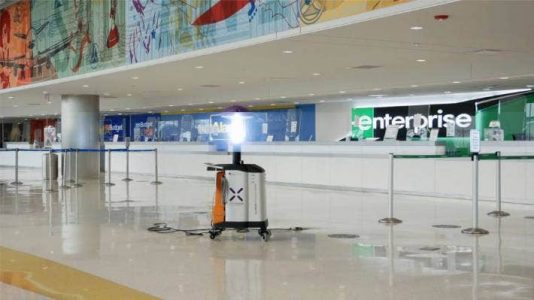 According to Mark Stibich, an infectious-diseases epidemiologist and chief scientific officer at Xenex, the high-tech plug-in pushcart uses powerful bursts of UV light to combat viruses on surfaces within a seven-foot (2.1m) radius in each direction. Initially developed for use in hospitals and recently picked up by a local school district in Texas, LightStrike is 43 inches (1.09 m) tall, about the size of a wheelchair.

While it has been known for decades that UV radiation can destroy viruses by chemically altering their genetic material, different pathogens are susceptible to UV light at varying wavelengths. Many traditional UV devices use low-intensity mercury bulbs, which means they may take longer to kill organic material such as viruses.

By contrast, in a test run at San Antonio-based Texas Biomedical Research Institute, LightStrike robots, which have a powerful xenon UV-C light source capable of damaging the DNA and RNA of viruses, destroyed the coronavirus in a matter of minutes.

Experts have warned that disinfecting points of physical contact has little effect on circulating air that might transport respiratory illnesses, so while robot cleaners can provide an additional layer of protection against spreading the virus, their value is questionable at airports. Still, the devices may help the struggling travel industry motivate some people to start moving again.

With the mission of creating a shell chair with a more unified look that would stand as one cohesive unit, Simon Legald has created…