Work is focused on the interiors of The Hotel Britomart construction now that the scaffolding is down revealing its breath-taking brick exterior. The 104-room hotel experienced six weeks of construction delays because of New Zealand’s COVID-19 lockdown but work on-site has now restarted. 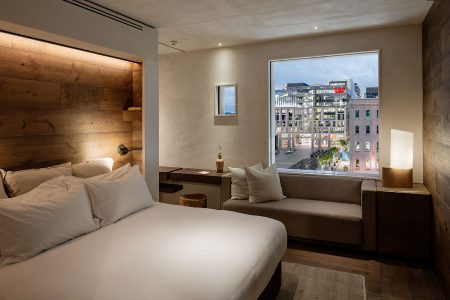 “The current circumstances mean our opening in October will focus mostly on domestic tourists, who we think will recognise the enormous appeal of The Hotel Britomart’s design and the many attractions of the Britomart neighbourhood around it.”

Designed by Auckland-based Cheshire Architects, The Hotel Britomart will be New Zealand’s greenest hotel, with a 5 Green Star rating from the New Zealand Green Building Council. The hotel is a bold new addition to Britomart, the historic waterfront neighbourhood in downtown Auckland that has been the focus of a thoughtful 15-year regeneration process led by Cooper and Company. 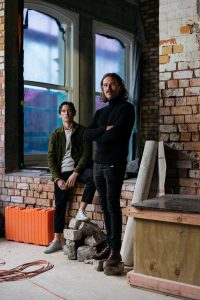 In the coming months, The Hotel Britomart will reveal the complete offering and how it will further bring to life the exciting Britomart neighbourhood.

“TFE Collection properties are each designed with individual character and charm and striking design and service are their hallmarks,” noted Farley.

Guests can expect customised experiences when The Hotel Britomart opens. 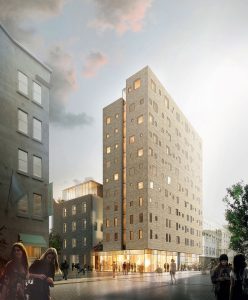 “There’ll be no stiff formality. Instead, the hotel team will be able to share their enthusiasm in inviting our guests to enjoy all of the richness and variety that Auckland has to offer.”

As well as a new brick-clad tower, the hotel project includes the refurbishment of two neighbouring heritage buildings. A new restaurant named Kingi (short for kingfish) will open on the ground floor of historic Masonic House to serve locals and hotel guests, while three other new restaurants are opening just steps from the hotel entrance.

In the latest update to Logitech’s presentation remote category, Logitech has announced a simple, reliable and hassle-free remote for better presentations across the board….